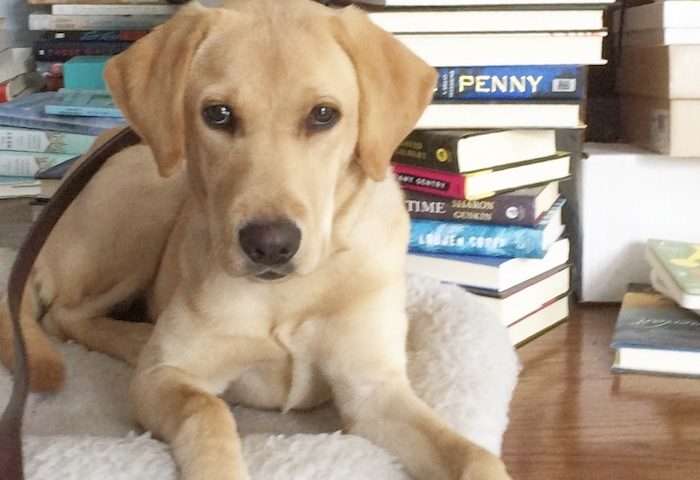 Almost a year ago, we got a new-to-us puppy, a yellow lab named Daisy. She’s a good dog, we think, and has been right from the beginning.

But she’s a puppy, and as our trainer constantly reminds us, puppies are knuckleheads. Adorable, enthusiastic, and sweet-as-can-be knuckleheads, but knuckleheads all the same.

We’ve been working diligently with a trainer (or at least as diligently as I can manage) since before we even got her. We’d never done this before, despite being dog owners for most of our adult lives. But a couple of years ago, our vet put us in touch with this trainer, after we rescued a terrier mix who proved to have a feisty temperament. (That puppy died, but when we were ready for another new family dog, we kept the trainer.)

Before we started working with this trainer, I had no idea how much I didn’t know about dogs. We’ve been putting in the work—and it’s a lot of work—and Daisy has been learning … but slowly. Really slowly.

The whole time, for nearly a year now, out trainer has been encouraging us, saying, You’re doing it right, even if you don’t see results yet. She’s a good dog, but she’s still a toddler. Keep putting in the work, even if it looks like it’s not working.

Yeah, we weren’t seeing it. We loved her, and we were glad she was ours, but dog whisperers we were not.

But then, a month ago, seemingly overnight, it clicked.

Nothing changed, we were still doing the same things we always had, but all of a sudden Daisy got it. Or maybe we did. It’s like she woke up one day and thought, Oh, I get it now! We’d been working with her steadily for 10 months and all of a sudden, she got it.

And it’s so different around here. We’ve always liked having her around, but now hanging with Daisy is a whole lot more fun and a whole lot less work. She gets to go to the bus stop, she gets to sleep at my feet while I work. She gets a lot more freedom to run and play and chase tennis balls, because we can trust her.

And sure, she still licks dirty socks and tries to eat out of the trash can when we’re not looking and loses her mind for five minutes when we have guests over, because she’s a puppy. But all that training we’d been doing for many many months with seemingly little to show for it? It was working, all the time. We just couldn’t see it yet.

I have a manuscript due in 7 days that I’ve been working on for a long time. I’ve been doing the work, but until very, very recently, it has persisted in looking like garbage. I’ve been running for ages, halfheartedly sometimes, but running all the same, and I feel like I’m not making progress. I could tell you eleven more boring, mundane examples of ways I put in the work and feel like I get nothing.

P.S. That photo up top is from last December, in our old house. Doesn’t she look at home with us? I’m pretty sure this is the day she skittered and knocked over one of those stacks, right after I snapped the photo.